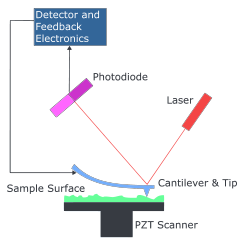 Diagram of how an atomic force microscope works

So there’s this amazing protein you want to study, and it might very well change the world, but you have a problem: how do you study the protein when its too small for even a microscope to see?

There have been a number of solutions to this problem over the years, many of which are still being used. You could, for instance, study the protein’s effects by adding controlled amounts of it to a sample, or you could keep an organism from producing the protein  through surgery, drugs, or geneticsand see what what happens when it isn’t there. More directly, the obvious solution is to get a better microscope. What do I mean by a “better” microscope? Well, although there are some drawbacks, there are some microscopes that can give much higher resolution and/or provide added information about what you’re looking at.

One example of this is an atomic force microscope. How this works is that a small needle on a cantilever connected to a computer is dragged across what you want to look at. The computer then measures all the bumps that the needle encounters and gives a visual representation on the screen. As you might suspect this method has a number of drawbacks, (the cantilever is fragile, samples have to be specially prepared, etc) but it is possible to identify single atoms using this method. 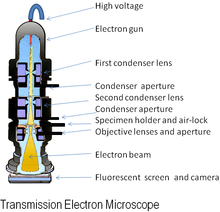 Another type of microscope that can help you find a protein is an electron microscope. The idea here is to use electrons instead of photons to look at a sample. There are a number of drawbacks to this idea as well, for one thing, samples usually have to be “fixed” with a chemical such as Osmium tetroxide  and this can sometimes change the way things in a sample look. However, here the drawback can also be a good thing. What “fixed” means in this case, is that the molecules are attached to the things around them, and so aren’t going to move around all over the place like they would normally. If you want to see stuff moving around, you’re out of luck, but often you want to see where something is at a particular time and you don’t really want it to be free to wander.

There is another benefit to using electron microscopes. Parts of a sample will be darker depending on how electron dense they are after they’ve been fixed.  the electrons that the microscope uses to scan the sample will bounce off of that part of the sample, causing there to be a dark region. It isn’t always easy to tell which molecules will be more electron dense than others, but there are ways of making it easier. For one thing, if you have a molecule that you know is electron dense that you also know will form a bond with the protein you are looking for, you can add that to your sample and then you can compare the dark regions in the treated sample to how an untreated sample looks. The dark regions that appear in the treated sample but not in the untreated will most likely be your protein. 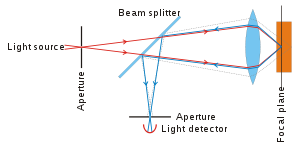 This trick also works with fluorescent and confocal microscopes. These microscopes shoot  beams of light at a constant, controlled frequency on the sample, causing some molecules to fluoresce, emitting light at a slightly different frequency. Confocal microscopes have the added benefit of being able to control where exactly the lasers focus so that it can show not only where something is in terms of up, down, left, and right, but also where it is in terms of depth. Once again, if you know a molecule is fluorescent and that it binds to the protein you’re looking for, you can add it to your sample and then check it out in the fluorescent microscope to find your protein. That’s great, but how do you find a fluorescent molecule to bind to your protein? 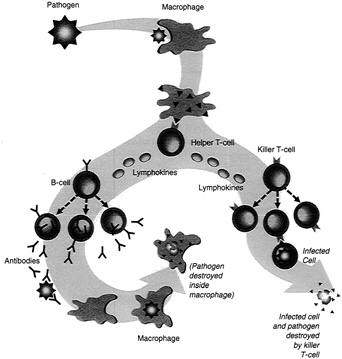 Well, your body has a ready-made system for finding molecules that will bind to proteins that has been tested over millions of years of trial and error. The immune system. If a virus or a bacterium enters your body and starts causing problems, your immune cells will start producing antibodies for the proteins that are present on the surface of the intruder, so that if it shows up again, it will be dealt with before it can cause any damage. Antibodies are large (by protein standards), y-shaped molecules produced by white blood cells. There are binding sites at the ends of the smaller arms of the y that bind to specific parts of a molecule. The binding sites act as a sort of lock, where the key is the part of the molecule the antibody binds to. There are a huge number of different binding sites that are available due to the genetic information encoding the antibodies getting shuffled and mutated all the time. When a cell in the body gets stressed, it sends out a signal that a white blood cell(a macrophage to be specific ) can respond to. This white blood cell then invites another cell (a T-cell) to take a look.  This T-cell will then go out and talk to another cell (a B-cell), which has a catalog of antibodies available for production that the T-cell can peruse by seeing if the peptide, or protein part, that’s in the stuff the macrophage ate, is also in the B-cell. If any antibodies from the B-cell  bind to something in the T-cell saw in the macrophage, then the B-cell knows to produce more of that kind of antibody. After that, wherever an antibody encounters its target, it triggers a response from other white blood cells.

Sometimes a cell might be stressed, but the antibodies will bind to something that isn’t the cause. Molecules, from peanuts, pet hair, pollen or just about anything might happen to be present in greater quantities than the thing that’s really causing the problem. This is how allergies happen.

That’s the bad news. The good news is that because antibodies can be found for almost any kind of molecule around, scientist can used lab animals to produce antibodies to the proteins they want to study. Furthermore, by manipulating the genetics of the animal, they can cause each antibody to be attached to a fluorescent molecule. The antibodies can be stored in a vial in a freezer and transported cold to labs all over the world. All a scientist needs to do then, is bathe whatever he or she is studying in a dilution of the antibodies, and then look at the sample with a fluorescent microscope. Wherever the sample fluoresces, that’s where the protein is.

Antibody production diagram is from A Positron Named Priscilla: Scientific Discovery at the Frontier (1994) National Academy of Sciences (NAS) ( http://www.nap.edu/openbook.php?record_id=2110&amp;page=69 ) all other images from wikipedia.