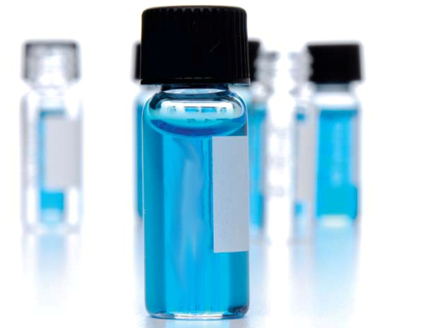 The general thrust himself into the lab, marching past the intern who had greeted him at the entrance of the building. He had two aids with him, one male one female, both of them looking like they had been manufactured somewhere, despite being perfectly human. They wore nondescript suits and were perpetually muttering things into their devices. The man himself had silver hair cropped in a military style and shoulders that spread out from his head like the wings of some bird of prey. He wore his uniform from his days as a general festooned with medals in the manner of someone you didn’t want to mess with.

Charles Gentry waited for the man and his entourage to approach from inside his clean room suit. He could hear his own breathing, feel the humidity of it as it threatened to fog the clear plastic of the helmet. The plastic was treated, so it would be fine, but there was still the feeling that condensation would form at any moment.

“Good morning, Dr. Gentry,” growled the general, all pleasantness stripped from the pleasantry, “Is there a safety issue I wasn’t informed of?”

“No, sir.” Charles studied the general’s two assistants, who were scanning the room continually but not appearing to see anything. “This isn’t a hazmat suit, it’s for the clean room. I’m in and out of there a lot today, so it’s easier just to keep it on. I just decontaminate the outside of the suit before I go in. You’ll see some of the other researchers doing the same. It’s uncomfortable, but it keeps things moving.”

The general raised his head up slightly in a half nod. The man valued efficiency, especially if it came at the expense of comfort. “Let’s be quick about this then. You say you have a prototype ready?”

It was Charles’ turn to nod. “We keep it in a sort of airlock between the wet lab and the clean room. It’s in a stable form, so you don’t need a clean suit to work with it, but both sides of the lab need access to it for experiments.” He walked, inviting the general to follow him. “ I appreciate you coming down here. Our funding is about to run out and we can’t run the risk of going through the usual channels.”

“I understand your research may prove a security risk. I’m warning you, though, this better be good, Dr. Gentry.”

“Oh it’s good alright,” Charles said as he reached the door to the antechamber. He couldn’t help but smile as he continued, “It might just mean the end to all war.”

The general’s thick eyebrows came together in a frown. “What do you mean? Is it a bomb of some sort?”

Charles realized he let out more than he had intended. He glanced at the general’s assistants. “What’s their security clearance?”

The general studied Charles for a moment, seeming to weigh the risks. He took a percussive breath. “Michaels, Chamberlin, wait here for me. I have a feeling this won’t take long.”

The two assistants rolled their eyes in tandem and stepped back as if security clearances were the bane of their existence and life would just be so much easier if they could just be allowed to follow their boss indefinitely.

“Five minutes at the most,” Charles reassured the general. “And you will be impressed; I can guarantee it.”

The general gave his half nod again and Charles yanked open the door to the antechamber, pulling against the negative pressure caused by the air being sucked out of the chamber and through the filtration system. Charles hoped the general didn’t notice. Then he realized the man probably wouldn’t realize the implications even if he did. It was too late anyway. He was in the antechamber with Charles, alone.

“It’s not a bomb,” Charles pulled open a fume hood and withdrew a vial of a dark, syrupy, aquamarine substance to show the general. He unscrewed the plastic top. “Some would call it a namcub.”

“A self-fulfilling prophecy, an incantation that affects the minds of those who experience it.  It’s basically liquid hypnosis.” Charles could tell he wasn’t getting through, so he tried one more explanation. “With this substance, you can hack somebody’s brain.”

The general immediately seemed to lose all interest. “We already have drugs for that sort of thing. Brainwashing techniques have been around since the nineteen-fifties.”

Charles shook his head, but the movement wasn’t that visible while he was inside his suit. “No sir, not like this. Look at it. Look how clear it is, how it moves just like water.”

“Yes it is clear. It looks just like water. But that’s not the point. We’ve tried these mind drugs in the past. They don’t work.”

Charles lifted the vial. “This isn’t a drug, sir. It’s billions of synthetic organisms and nanomaterials in a nutrient bath. Smell it.”

The general brought the vial to his nose and sniffed. He scrunched his nose at the sharp scent of sulfur and alcohol that burned his nostrils.

“Right,” the general agreed as if it were obvious, “The problem is even if it works, it’s still not as effective as a spy with their brain intact. Drug induced sleeper agents have a bad habit of staying asleep.”

“But, if you could get control of specific people in power, if you were smart about it, and remained hidden …”

The general laughed, took the vial and drank the contents in one gulp. “Go ahead, Son. See if you can do it. See if you can convince the president, congress, the American people, that they’ve been a bunch of idiots and they need to listen to you. See if you can change one thing for the better and not have it get corrupted, perverted and spat back into your face. Go ahead, show me how to rule the world. Because I sure as hell haven’t been able to figure it out.”

Charles took a breath as the enormity of what he was trying to do hit him. Then he let it out with slight chuckle. “I hear what you’re saying, sir. It is a difficult problem to solve. That’s why I feel education is so important.” Charles put an arm around the wide shoulders of the older man. “It’s our children who need to learn to rule the world after all. In fact, I think education is the most important issue facing our country. Don’t you agree?”

Charles smiled and patted the man on the back before opening the door and letting him out of the antechamber. He told himself he was being responsible, making sure his technology wasn’t used by the wrong people. And maybe the government would concentrate a little more on education.

What could be wrong with that?

Charles tried his best not to answer that question.