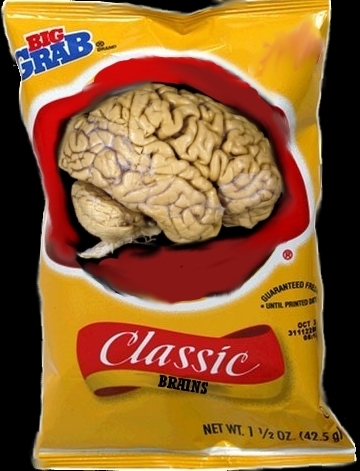 It was potato chips. Potato crisps if you’re British I suppose. Doesn’t really matter. They were ubiquitous. They were in every household. The plague rats of the twenty-first century, and nobody suspected.

Now almost everyone is dead. Including me.

Except…Wait… I’m thinking! The plague must not have completely killed me! I blink. My vision is blurry, but it slowly begins to clear. A lady is cornered in an alley by a cadre of my fellow plague victims. Zombies. She wields a shotgun. She shoots a zombie in the chest, but of course all that does is knock it back a few feet. I suppose she didn’t watch any horror movies before the plague. Probably thought they were too gory, or a waste of time.

She’s thin, kind of bony, and she wears dark rimmed glasses. The right lens has a crack in it. One leg of her slacks is in tatters and her blazer is ripped. She was probably a very severe looking woman before the plague. Very conservative. The kind of person you wouldn’t expect to eat potato chips. I guess that’s how she managed to survive.

It’s strange, but I think the post-apocalyptic look suits her. Her hair coming out of her bun in wild wisps, her eyes wide, I doubt if she would look as attractive all tightly put together like she must have been before.

I realize I’m shambling toward her. I try to slow myself, but I still don’t have complete control. Using all my will power I manage to raise my arm. It hurts like hell. My arm shakes. It looks like I’m reaching for her as I stumble forward.

If I can just communicate somehow, maybe I can help her. Maybe I have an immunity of some kind to the disease. I struggle to bend my elbow. To move my fingers. My joints creak with the effort. I do a slow wave. I move my dry tongue around in my mouth trying to work up some saliva. I try to talk, but my first effort comes out only as a moan. I try again, but instead of “Hey don’t kill me, I’m not like the others!” or “I’m not quite dead yet!” it comes out as “Braaiiiinsss!”

“Thanks for the tip,” the lady says, smirking and looking crazed. She re-chambers her shotgun. She apparently is taking what I said as advice on where to aim.

My eyes go wide. My lips crack in a dozen places as I mouth the word “NO,” and I try to move away as she aims the barrel of her weapon at my head and-