How to Make a Mutant: Mutagens 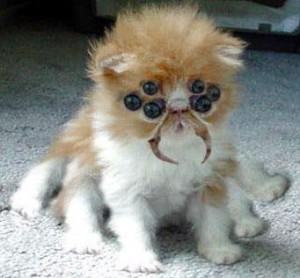 The term “mutant” gets bandied about quite a bit in popular culture. It can mean some freakishly deformed animal or person, or, more recently someone with magical, almost god-like powers (if you think that the X-men stories are completely scientifically accurate, then you have a disturbingly unrealistic understanding of the universe). But the reality is that mutants are all around us. The word comes from the Latin mutantem which means to change. In some sense, then, we are all mutants, as our genes are naturally a mix between the genes of our parents and therefore are always changing. Usually though, by “mutant” we mean some organism that has had their DNA altered by artificial means. Even this more focused definition still applies to an astounding number of the things we look at every day.

There are basically two ways of making a mutant: using a mutagen, or specifically targeting  an organism’s genome. We’ll talk about mutagens first. A mutagen can be anything from nuclear radiation to insecticide. Anything that’s a labeled carcinogen is also mutagen, as cancer is perhaps the most common form of mutation. Since cancer happens naturally, it’s perhaps a little  incorrect to put  it under the heading of “mutation,” but as some unfortunate people are intimately aware, cancer can be caused by man made materials, so it does fit. 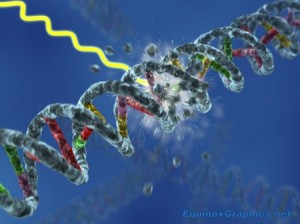 Before we get too ahead of ourselves, we should first go over how a mutagen might make a mutant. The way it works is this: every living thing starts out as a single cell. How this cell behaves is determined by the genetic information in the DNA of the cell. This behavior includes how it divides, what structures it makes, whether it moves around, how it connects to other cells, you name it. If this cell is exposed to a mutagen, then this DNA might be altered. For instance, if the cell is subjected to ionizing radiation,  subatomic particles will scour through all the material of the cell including DNA, knocking electrons and possibly even whole atoms off the molecules that make up each material. If the intensity of the radiation is low enough, most cells can repair this damage, but some damage might be too severe to repair, or might be missed by the repairing processes, and if this happens to DNA, a mutant can result.

Ionizing radiation, as you might imagine, is a rather ruthless mutagen. It’s a bit like trying to hit the bull’s-eye of a target with a shotgun. You might get lucky and hit the area you want, but even in the best case scenario you’re going to have collateral damage. So while this type of mutagen is the most commonly found in nature, it isn’t something you want to use to find a beneficial mutation.

A slightly more nuanced approach is to inject material that looks like a section of DNA into the originating cell while it’s dividing. This approach only affects the DNA, and so you don’t have to worry about killing the cell outright, but it’s still random and so it could cause changes that an organism won’t be able to survive. There is a more sophisticated version of this involving actual foreign DNA, but we’ll get to that in the next post.

One of the mutagens most commonly used in labs is a chemical called EMS (Ethyl MethaneSulfonate). This chemical will affect the DNA of a cell by affecting  only a single nucleotide base pair. This allows much more of the mutants to divide and develop fully into adult organisms.

All these methods will produce mutants, and this is far from a complete list, but scientists usually have a specific mutant in mind. For example, a scientist might be interested in muscle growth and wants to find an animal mutant that will mimic a known human disease. 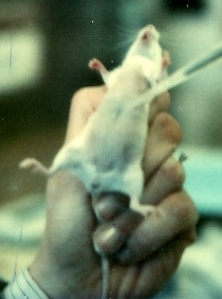 The first step for this is to find the right animal model. Animal models are used in many kinds of research genetic and otherwise. A human model wears fashions or tries different products so that we can see how they supposed look or work in an idealized environment. In a similar way, an animal model is given different ailments so that scientists can see how the animal responds to different treatments and other situations, with the hope that a human might have the same result. Humans are not all that different from other animals, as even Aristotle was aware, (We should venture on the study of every kind of animal without distaste; for each and all will reveal to us something natural and something beautiful. -Parts of Animals I.645a21)  but certain animals are better for studying different systems. If you want to study the higher functions of the brain, for instance, you probably want to work with mice, or chimpanzees. If you are interested in the steps involved with development from a single cell to an embryo, however, you might use zebrafish, as zebrafish embryos are transparent, allowing you to see many processes hidden in other animals.

One thing that is common for most animal models is that they tend to have faster life cycles, and produce more young. If you are a graduate student hoping to get your PhD in two years, you don’t want to have to wait ten months for an animal to get born, just to find out it doesn’t have the right genetic make up and you have to start all over again. In lectures, scientists often talk about how expensive each animal is. In other words, how much grant money goes into studying each individual animal. If a study is supposed to follow the entire lifespan of a rat, then it’s going to take four to seven years, and so that rat is going to be very expensive. If a scientist does a similar study with a fly, on the other hand, it will only take a few months and therefore be only a fraction of the cost. Also, while there maybe eight to twelve rats born from a mother, which is a good number in comparison to a chimpanzee, there still may not be enough chances for the pups (baby rats) to have the right genetic make up. If one of the pups needed for the study dies, it can be devastating, while if a fruit fly dies, there might be forty other flies to take its place. This is one reason why fruit flies are used often in genetic studies. 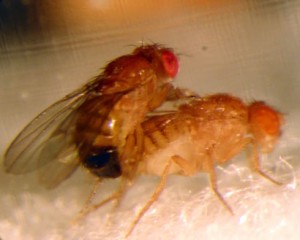 Let’s look into how to make a fruit fly mutant. The procedure is typically to subject fertile, male flies to a mutagen (EMS for example) for a period of time, and then allow them to reproduce with normal female flies. Some degree of care must be taken to ensure that the female flies are virgins, so that there isn’t any chance of another fly’s genetic material getting involved. Thankfully virgin females are paler and a black dot is visible on their abdomens. They are therefore distinguishable from older females, which don’t have the black dot, and males, which have darker coloring and a reddish structure at the ends of their abdomens. To examine these features, a researcher can take flies and subject them to CO2 gas, which knocks them out. They can then manipulate them using tweezers and a low magnification microscope. The virgin female flies are sequestered in a separate vial with a mutagen-treated male and allowed to mate. The female will lay mutant eggs, which will eventually become mutant larvae, and then mutant flies. Depending on what trait a researcher is looking for, they will analyze either the larvae or the flies for altered behavior or health. 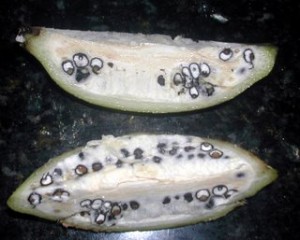 This method  of producing mutants has been around for decades. You might think that they are science fiction things, but if you walk into any sophisticated biology lab and talk to somebody there, you’ll find that mutants are not only studied a lot, but they are almost taken for granted.  Furthermore if you take away the use of mutagen, this kind of directed evolution has been around for ages.Without human intervention bananas are, fat, green, cumbersome things that are difficult to work with. By cultivating the trees that produced the tastiest, easiest to eat fruits, however, humans managed to breed the trees to produce the banana we know and love today, a fruit that fits so nicely in the hand, and opens so easily it seems like it was designed for us. It seems that way because we designed it.

This also has happened with animals. Geneticist Dmitri Belyaev managed to domesticate foxes, by breeding the ones that were the most tame. The breeding program was successful, but oddly the tame foxes began to look an awful lot like dogs.  Belyaev’s research suggests that many of the same genes that control physical attributes, also control behavioral ones. Just as he domesticated foxes within his life time, wolves must have at one time been domesticated by early humans. In other words, when you look at a dog, you’re probably looking at a mutant wolf.