The Meaning of Good

What is the meaning of “good”?

That’s a question I’ve been struggling a little with lately. I’m not concerned with “good” in a moral sense, that question has its own difficulties. I’m just talking here about “good” as in “that was a good book I read.” Or “that was a good movie.” So, okay, this is a subjective thing. You either like something or you don’t. If you like it, it’s good, if you don’t like it, it’s bad.

Hold on. That’s overly simplistic! There are some things I like more than others. That doesn’t mean some of them are all good and some are all bad. There’s a spectrum. Some things can’t even be called good or bad; they’re just “okay.” So there’s a region on the spectrum where things are bad, and a region where they are good and an area where maybe they’re just okay. I can even assign a number from 1 to 10 or 1 to 5 indicating how good I think something is.  I can assign a rating, and so can anybody else. Putting a large number of ratings together into an average, then can give an indication of  how good something is to most people.

Okay, but, let’s face it. Most people are idiots. All of us have probably felt the frustration of not liking something that was extremely popular. In my experience almost every book or movie that made it big had some major flaws in it. Lord of the Rings was full of unneeded exposition and involved a long trek that could have been avoided with much less bloodshed if Gandalf had pulled out the rocs earlier. The system of magic in the Harry Potter universe has no logic to it. Curses and other bad magic things happen, and then other people poof it away.  There doesn’t seem to be any explanation as to why some things work and some don’t, which is fine in a fun YA romp, but becomes a bit frustrating when situations become more dire. How fast, for example, does an avra kadavra shot fly from a wand? Is it instantaneous or can the victim dodge? Is there another spell that can block it? When Voldemort and Harry are dueling with their wands, what governs who beats whom? Is it sheer will? Is there some skill or strategy involved?  In the Twilight books you have sparkly vampires. The Hunger Games is has a scene or two where someone is about to commit suicide. You might disagree with me on some of these problems or that they’re problems at all, but the point is that, assuming for the moment that these issues exist, why are these books popular when there are other books that don’t have these problems that no one seems to know about?

Hold on a second. That seems obvious, but if you can’t figure out what is good based on popularity how can you tell if it’s good or not at all? We’re back to saying it’s subjective. We tried that line of thought already, but maybe we can come at it from a different angle. Everyone has different criteria for judging things. Some people like Rap. Some people like Rock and Roll. It’s a matter of taste. Okay but there are bad Rap songs and bad Rock and Roll songs and people disagree there too.

So even the people who agree, disagree? Does the word “good” even have a meaning? We’re beginning to veer into postmodernism. The only reason any word has meaning is because a sizable group of people have agreed that a given collection of symbols or sounds should mean a set thing.  If no one can agree what is good and what isn’t, how can anyone be sure what the word means?

Complicating the issue further,  generally people like things that are original. In order for the public to think something is good, that thing must change public opinion in some way.  So you can’t say that just because something falls in line with what the rest of the public usually thinks is good, that the public is going to like it. 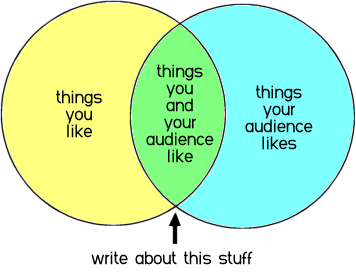 So if you’re a creator of some work, how can you judge whether it is good or not? Your own enjoyment may have been in the act of creating the work itself, and furthermore you might run counter to the popular ideals of your time. If you are sure that no one else will appreciate it, then you can keep it to yourself and move on to some more pedestrian project when and if you want to make money. How can you tell if what you’ve done is good in a more universal sense though? I don’t really know, of course, but I feel obligated to come up with some answer, and I think it might be that you have to be true to your own idea of good, but provide a bridge to the popular idea of good.

Maybe you’re in a world where everyone loves dogs and hates cats, and you love cats. Maybe you write a story about a dog that befriends a cat. Or maybe you make art with dogs and cats getting along. I don’t know. The idea probably falls apart if you try to think of making something truly abhorrent, like killing children, popular.