So occasionally I run into words I don’t know, and I put them in a list to look up later. Today I looked into the word “elestial” (not a typo (at least not anymore)) It’s used to describe crystals that are naturally etched and are made up of faceted columns that come to points at the top. 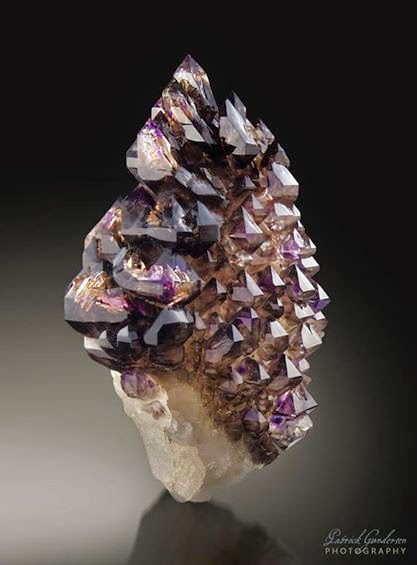 But most people who use the word are more concerned with their ability to connect people spiritually to the Akashic record of the universe…or something like that.

From my google searches, you can apparently start a small fight among gem lovers by using the word in a sentence, with all the serious gemologists poo poo-ing the crazy new agers who use “elestial” when…”horizontally striated hexagonal prisms terminated by a combination of positive and negative rhombohedrons forming six sided pyramids” would do. Normally I’d be on the side of the scientists, but elestial just sounds way better and I can see using it to describe other things. Like Superman’s fortress of solitude for instance.

But I’d kind of like to know where it came from, just in case there’s some extra nasty connotation I’m not aware of. Or maybe a cool connection to someone who was otherwise lost to history. I got two leads from Reddit. One person said that it was named after the “Lost City of Elestia.” I tried looking that up and came up with nothing but My Little Pony fanfictions. (By the way, if you’re bored sometime, look up Friendship is Optimal. It’s a trip.) The other lead, which is probably more likely, is that someone just dropped the c off of celestial and started describing crystals that way.

But when did they start doing that? I used Google trends to see if there was any time when the term picked up steam or something. It’s been pretty flat for along time, but there was a peak in January of 2004. Or maybe that’s just when Google trends started monitoring things so maybe everything has a peak there. 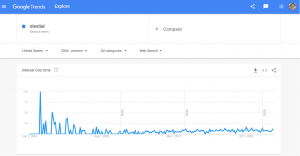 I have this idea that some shaman or mystic out in Arizona or Colorado started selling pamphlets about elestial crystals at some point and the term caught on. I just wanted to look up an easy definition before going to bed because I was too tired to do any real work, but not ready to sleep yet. Only now I can’t sleep because I want to know who the name of the guy or gal who started calling crystals elestial was. Just so I can relax a little I’m going to pretend it was a guy named Herman Bellfeather. Was he crazy? Was he a genius? Maybe a little of both. He’s mostly a recluse now, but you can still find him walking around San Francisco occasionally, muttering to the seagulls.