Most bacteria, including E. Coli bacteria, which cause food poisoning, move around by using flagella. Under the microscope, flagella look like kinked up hairs sticking out of the cell and undulating rapidly. If you remember high school biology you might already know, or think you know all about flagella. They’re those hairl-like  things that cells whip back and forth to move forward right?

Not exactly. There are basically two kinds of flagella, the ones that bacteria have, and the ones that eukaryotic cells have. The eukaryotic ones do in fact whip back and forth. The bacterial ones, however, actually propel the cells they’re attached to by corkscrewing through the fluid. As I went over in a previous post, the situation bacteria are presented with isn’t the same as a submarine in a ocean. It’s more like a submarine in a large silo filled with vibrating pebbles. Drag is a huge deal. Bacteria need a powerful technique to move around and a corkscrew type action works rather well.

When you use a corkscrew on a wine bottle you basically turn it around in a circle as it progresses into the cork. So here’s a question: how does a bacterium do that? The flagellum has to be attached to the cell with a buttload of strength to pull the cell along, but at the same time it has to be able spin around like a drill bit. If you look at all the different components of the flagellum (pictured below) you can see that the structure is pretty complicated. WTF? Aren’t bacteria supposed to be primitive organisms? 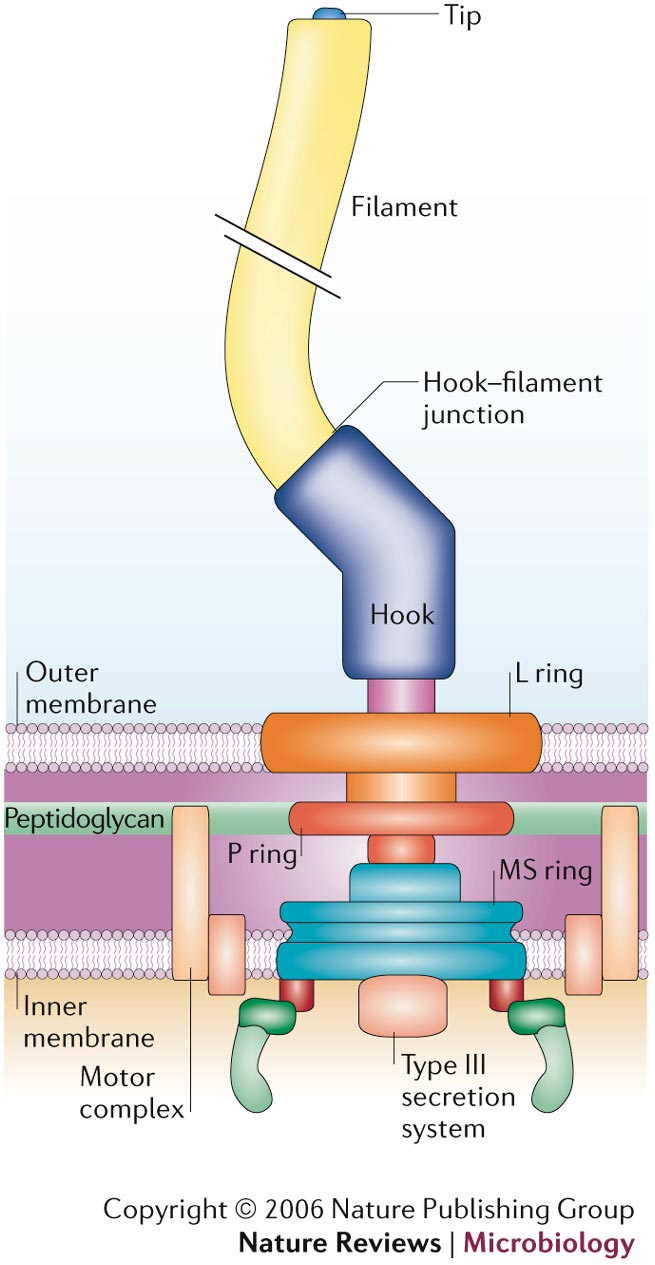 Well, yes and no. You see, the thing that’s easy to forget about evolution is that every thing that’s around has been evolving for just as long as everything else. It’s just that while our cells were busy trying to figure out how to differentiate and work together to get to places where there was better food and water and such, bacteria were hunkering down and learning to live in the environments they found themselves in. They’re just as good at being bacteria as our cells are at being part of a larger organism. Still, the flagellum is so mind-bogglingly complicated and yet robust in its implementation, that it has from time to time been used to prove or disprove the non-existence of God.

The argument runs something like this: “We and the organisms of Earth have to have been created by a God,” say creationists, “because the bacterial flagella is so complicated that it could not possibly have been formed by chance, any more than a hurricane could blow through a ship yard and create an aircraft carrier.”

“But,” say non-creationists, “each protein that makes up the structure of a flagellum looks similar to proteins used in other, less complicated bacterial structures. Furthermore the flagellum of E. coli is only one variant of many, indicating that one Doesn’t it make sense that flagella might have come from mutations that put the proteins together in ways that were somewhat beneficial? If even one bacterium survived a trying situation better than its neighbors, it would quickly begin to dominate. And evolution of bacteria has been directly observed in nature and in the lab. At the very least that seems more plausible than everything getting poofed into existence through some unknown process by a magical man in the sky.”

You can probably tell which side I favor.

Something that you start to notice if you study biology is how complicated and diverse proteins are. Proteins aren’t just little specks that bump into each other in random ways. Each protein has a different shape and different areas that have different properties that interact with other proteins in different ways depending on environmental factors. It’s an imperfect analogy, but you could almost say proteins have personalities. Almost like people, proteins will work together, compete with each other, and even find things in their environment and use them to accomplish a “goal.” A protein may be stuck in a bad position, for example, and it may come into contact with another protein that likes to pry things apart, and then they will help each other out.

In a similar way, proteins just want to be in equilibrium, and so they will often use things like enzymes to make equilibrium easier to achieve.

If you are doubtful of any of this, you need only see a video of how a flagellum is formed in a bacteria. The formation of a flagellum is a marvelous and awe-inspiring dance and it happens hundreds of times a second in a single organism ALL THE TIME. You don’t need religion for miracles. You just have to look around.