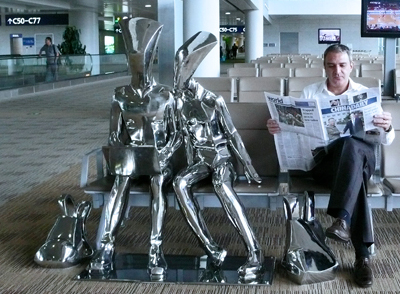 The airport bustled with all manner of biped  from short and hairy to long, thin, and slimy. There were no quadrupeds or many legged creatures, thank Telrok, but a thin miasma of stench nonetheless assailed Goraff’s nasal ducts. Damn earthlings with their toleration of subspecies. Sometimes Goraff wished his government had eradicated them from the outset instead of setting up trade.

Goraff looked up at the gate number. Z-56.  Eighty three more gates to go. What was the use of faster than light travel if one had to walk for eighteen miles to get to it? And all the security! If Earth and the aligned worlds had just obliterated the moon based Quookle colony when they had the chance, they wouldn’t have to worry about the spine covered beasts sneaking in with someone’s luggage now.

Goraff read the time from his left tentacle. It was the hour of Kartam. 2:40 pm Earth time. He was still early, but only by 20 Earth minutes. He stepped on the treadmill boost and gripped the guide rail tightly with his tentacle. He whizzed past the bipeds buying useless trinkets and postcards from the duty free shops and he was all the happier, even with the fetid air that blasted his sensitive face skin. He would be purple by the time he reached his gate, he was sure.

He stepped off at the end of the tread mill onto the decelerator which slowed him to walking pace. He looked up at the gate number. Z-130. Almost there.

An announcement issued from a ceiling intercom in English: “Galactic Flight 34268 to Pamff has been delayed due to foam liberated from the craft on reentry. Please contact the nearest Galactic terminal to reschedule your flight.”

Goraff cursed in his mother tongue. At this rate he’d never make it to his womb-mate’s wedding in time.