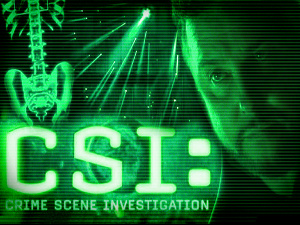 Who are you? That’s the question asked repeatedly in the song by The Who that CSI uses as it’s theme song. The answer, it seems, is found in the various pieces of evidence the Crime Scene Investigators find. Sometimes it’s pieces of fiber or pollen that eventually lead to the answer, but by far the most common method of determining identity is analyzing DNA evidence. What you see in the show is attractive people in lab coats taking samples of tissue, sticking them into some machine and then looking at a bunch of bars on a lit screen and saying things about what they mean. How is this any different from the old methods of reading patterns in tea leaves or goat entrails?

First off, I should probably point out that tv shows don’t always get things right. It usually takes much longer to get a result from a DNA sample, and if you recall the Casey Anthony trial and the OJ Simpson trial, DNA evidence does not always lead to a sure result. Well, what good is it, then? It’s not that DNA evidence isn’t useful, it’s just that there are circumstances where it isn’t available or isn’t clear. Similar to fingerprints.

So how do they analyze the samples they gather? They can’t use karyotyping usually, because they need living cells in order to do that. Thankfully, technicians don’t need to have DNA in chromosomes in order to be able to analyze it. As long as all they are looking for is straight DNA, they can get it from almost anything biological. Hair, skin, saliva, blood, and other fluids all contain viable DNA.  You still have to get it out of the sample first. 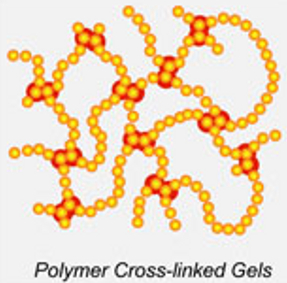 Close up of polymer gel structure. Water and small molecules can pass through spaces in the mesh. Image adapted from http://bit.ly/qvsOix

One way to do this is to crush and dissolve the sample using proteases. Proteases are enzymes that eat up proteins. They are present in a lot of different cells and even in some of the food we eat. If you’ve ever eaten a lot of pineapple and found your mouth sore afterwards, the reason is because of the proteases in the pineapple. This is also the reason why it is very difficult to make pineapple jello. Jello is a type of gel, a substance made up of proteins that form a mesh that traps water inside. If there is too much protease present, that mesh can’t form, and the Jello mix stays syrupy. The materials that keep your body’s cells from moving all over the place are also a mesh of proteins, and so if there is enough protease, some of this mesh will be dissolved. This is why pineapple can make your mouth sore. It is also why a strong protease can eat away the proteins that surround a DNA sample. Hair samples, in particular, have a lot of protein surrounding the DNA, so there needs to be a lot of protease to get to it.

Often both a protease and a detergent is used just to be sure the DNA is accessible. After this, the sample is put through a centrifuge to remove the lighter, non DNA molecules from the heavier DNA. Once the DNA is free, chemicals or heat is used to separate the two strands of DNA into single strands. This allows the restriction enzymes to work on the DNA. Restriction enzymes cut the DNA at specific areas that a technician can determine ahead of time. DNA is formed of four different bases: Adenine, Guanine, Cytosine, and Thymine, Each enzyme attaches to a certain sequence of these bases and cuts the DNA where ever that pattern shows up. DNA from different individuals will have different lengths between each recognized pattern and so will be cut up into differently sized sections after the restriction enzymes do their work.

The cut up DNA is then poured into a gel, usually made out of agarose or polyacrylamide. Just like Jello, these gels are made of long molecules connected together to form a mesh that partially traps water. The DNA fragments can travel through the spaces in the mesh, but not very easily. Lab workers apply an electric field to the gel using a tray with exposed electrodes that holds the gel immersed in a bath of mostly water mixed with some chemicals to help pass the electricity to the sample.  DNA is made of sugar molecules, and like most things made of sugar, it becomes negatively charged very easily.  In fact, unless DNA is in a solution with a high pH, it will have a slight negative charge, and so the electric field made by the tray device  pushes DNA down the gel toward the positive electrode in a process called electrophoresis. 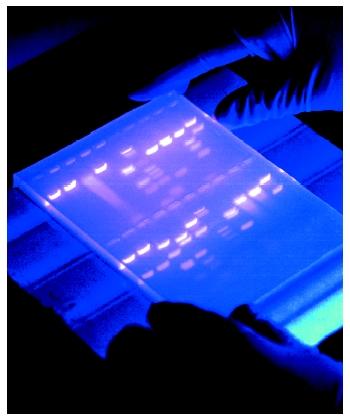 The larger the piece of DNA, the harder it is for it to pass through the mesh of the gel. Smaller strands will therefore travel farther along the gel in a given period of time.Fragments of DNA that are the same size will be in the same area of the gel after they’ve been pulled through it, forming bands in those areas. These bands are still not visible, however, until the lab worker applies some kind of label to the DNA. This could be a chemical dye that binds to DNA, or DNA fragments with radioactive isotopes attached. The most common chemical dye is ethidium bromide, which is only visible under a black light. The lab worker can place a gel stained with ethidium bromide on a scanner attached to a black light to record the bands in the gel. In the case of radioactive isotopes, a film sensitive to x-rays can be placed on the gel which will turn dark where ever the radioactivity is.

Gels fall apart very easily, so many lab workers will transfer the DNA from the gel to a sheet of filter paper by pressing the paper to the gel and passing a current through it for some time. Then they can apply a label as before to see the bands of DNA.  These bands are what you usually see on tv shows where they compare DNA. By looking at where the bands from different samples show up, a lab worker can tell which samples are from the same source and which ones aren’t.

Debbie Knight at biologyze gives an excellent  detailed accounting of the process of gel electrophoresis here if you’re interested. She uses it to analyze proteins, but the idea is very similar.

Sometimes there isn’t enough DNA in a sample to get visible bands, in fact, this is usually the case. For these situations, there is PCR. PCR stands for Polymerase Chain Reaction. Polymerase is an enzyme that replicates DNA, but it’s more complicated than that. In order for the DNA to be replicated, it has has to be separated into single strands from its usual two stranded arrangement. This is called denaturing the DNA. In nature, this task is performed by proteins called helicases, however in the lab, heat or other chemicals can do the job.  Chemicals are somewhat difficult to work with, because they have to be washed out of a sample every time they are used. Heat is a much better denaturing agent, but most polymerase molecules can’t stand the heat needed to separated the DNA.

Thankfully scientists found the molecule Taq, a DNA polymerase found in bacteria that can withstand the heat.  So what happens during PCR is that after Taq is added, the samples are first heated to a temperature high enough for the DNA to denature. Then the temperatures lowers, letting initiating sections of DNA called primers to attach or anneal to the fragments. Then the temperature raises again to a temperature that is ideal for Taq to replicate the DNA. Finally the samples are heated once more, so that the new DNA fragments separate again with twice as many fragments as before. This reaction is performed again and again, so that first two new strands are made, then four, then eight and so on, the amount of DNA increasing exponentially with every cycle. This way even with a miniscule amount of DNA you can have enough of a sample to work with.