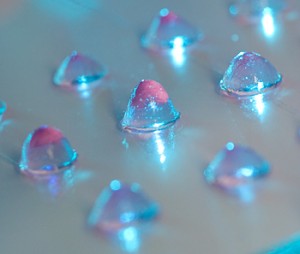 You might think that gels are just things you put in your shoes or in your hair. You might just think of Jello when you hear the word. But gels can do a surprising number of things and can be used in a lot of interesting ways.

First off, what exactly is a gel? The part you know is that a gel is basically a material that’s somewhere between a liquid and a solid. It holds its shape like a solid, but jiggles and deforms as if it were a liquid. What you probably don’t know is that this strange state is caused by a battle between several different forces, some of which try to pull a gel apart, while others keep it together.

Most gels are made up of long stranded proteins or sugars that have a strong negative charge in environment of neutral pH, a situation similar to what  molecules of DNA experience. However, unlike DNA, gel molecules can cross link to one another if they are heated and then cooled. Because of these crosslinks, as much as it would normally take a lot of force to bring the negatively charged molecules together, the crosslinks hold them so they can’t disperse. It’s like a small crowd of people that decide to hold one another’s hands. If they then try to get as far apart from one another as possible, they will form a fairly stable circle. The spaces between the molecules in a gel are usually filled with water or some other liquid medium, giving them their liquid-like properties.

Because gels have these spaces, they can be used as nicely uniform filters as in polyacrylamide and agar gels used in electrophoresis. You can also make aerogels or xerogels by quickly evaporating the liquid inside a gel without allowing the gel structure to change. The resulting materials are light weight (because they are mostly air) and have incredibly large surface areas. 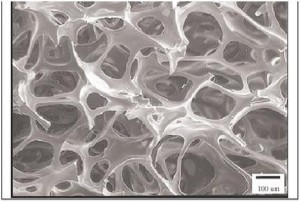 http://bit.ly/vyKHu3 : A picture of the structure of a dried hydrogel (or xerogel)

Why is surface area important? If something has a large surface area, dust and other materials have more opportunities to land on it. This is why if you look at air filters they’re made up of dense meshes of stringy material. Air filters are, in some ways, a primitive form of aerogel.

Another neat thing that we can do with gels is use them as sensors. Because the space in between the molecules of gels can be filled with many different solutions, and the molecules themselves can be engineered to have different properties, gels can be made to drastically change their properties with temperature, in the presence of different chemicals, or when the pH changes. Gels that do this are sometimes called smart gels. Gels can also be made from protein fragments to provide a scaffold for specialized cells, allowing them to be used for a variety of applications in medicine.

Probably the most amazing gels however are living cells and tissue. If you think about it, almost every tissue in your body is made up of a network of molecules connected together and filled with liquid. You are essentially a conglomeration of gels.