Just as an excuse to blog more, I’ve decided to post a blog about random bits of information I’ve come across. Today I read about the Information Processing Model of Cognition from the book Cognition: Theory and Applications by Stephen K. Reed, published in the year 1982. 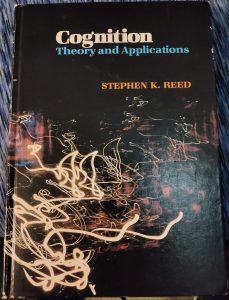 Cognition is defined according to this book and most psychologists as processes “by which the sensory input is transformed, reduced, elaborated, stored, recovered, and used” (Ulric Neisser 1967)

This covers a lot of ground, but all the elements here are interrelated in big spaghetti tangle so it’s difficult to make sense of one part without considering the others. Perhaps the most popular way of doing this is the Information Processing Model.

The idea with this model is that information goes through a sort of assembly line of brain regions where it is processed for storage and prepared for retrieval.

The book offers the diagram from figure 1.1 as a basic outline of how information gets processed

Perhaps the most interesting part of this, admittedly rudimentary bit of information is the “filter” and the “selection” stages. At the time of the writing of the textbook, there was considerable debate as to how mental attention operated, with some people saying that the brain blocked certain sensory information from getting to the parts of the brain responsible for recognizing things at all, while other people said that the brain recognized things well enough, but then other parts of the brain cherry picked the parts it wanted to keep, and let the other parts be forgotten. Most had come to the uneasy compromise position of saying that both types of filtering occurred, and so both are present in this model.

What does this imply for people with Attention Deficit Disorder and other similar issues? Is the problem with the filter or the selection? I haven’t done the research yet, but my feeling is that the primary problem is in the selection area. If you notice, the arrows in the diagram go in both directions. So if there’s a problem at the selection stage, a person would have trouble recognizing information from memory as well as from their current situation. And this matches the things I’ve heard anecdotally from people diagnosed with ADD.

What do you think?

I’ll try to find some more current information and post it, but if you have any ideas, questions, or information, leave a comment.