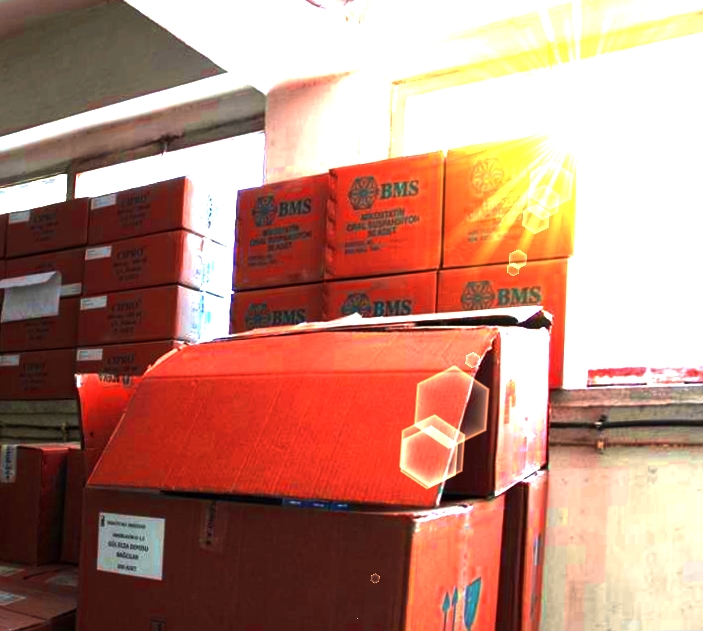 Marcus stood on the catwalk looking over the trucks and airplanes as they were being loaded with vaccine. “Ladies and Gentlemen!” He called, his voice echoing from the walls of the hanger. “We are about half an hour from go time, those of you who have finished loading your transport may want to take this time to pray. Whatever you believe in, whether it’s God , the Devil, or your lucky rabbit’s foot, get them on the horn. We need all the help we can get. Good bye, and good luck.”

Marcus wiped the sweat beading on his forehead, turned around and walked toward the stairs, wanting to say more, but knowing there wasn’t more to say. Nothing more to do. It was all up to the drivers, the pilots, the guards.

“A rousing speech, Marcus.” Hamilton’s crisp, English voice sang from behind him. “May ask what you believe?”

Marcus paused at the top of the steps then continued down. “I believe in the human race, Hamilton. I have to spend all my energy just doing that. What’s going on with the air conditioning?”

Hamilton was quiet for second or so before answering. “The repair man says it will be at least another hour before he can fix it. We’ll just have to endure it, I’m afraid.”

Marcus whirled around facing the retired British officer. “I’m not asking for my comfort, damn it! If those crates of vaccine get too warm, they’ll be worthless.” When he saw the older man’s lined and weathered face, though, he calmed himself. “I don’t mean to snap at you. You’ve been a great help to us.“

Hamilton raised a hand to say he didn’t mind. “I’ll ask the man to put a rush on it as soon as we get back inside. Maybe an extra body on the problem would help speed things along.”

Marcus nodded and turned back around to continue down the stairs. Hamilton had provided the hanger for them.  Of course the Air Force probably wouldn’t have problems with the air conditioning. Of course any of the military divisions would have probably operated with much greater efficiency. But aside from the National Guard, all the military branches were preparing for an extraterrestrial onslaught that might never happen.

Marcus walked down the length of the hanger, to the door that led to the office area. He had to wait for several people to exit before he could enter. The hanger wasn’t meant for this much traffic.  One of the people leaving, a young man with a mop of blond hair, noticed Marcus, though, and stopped him. “Sir! They’ve translated some of the Glitch message!”

The news had started calling the aliens Glitches, because that was what they seemed to be at first. The Glitches had started their siege by co-opting all satellite communications with what sounded like a mix of feedback and whale calls. Then, without any warning, people started coming down with what seemed at first like a new strain of flu, only the victims started feeling pins and needles sensations, then complete numbness. They became paralyzed, locked in their bodies, unable to move as their nervous systems were systematically destroyed.

“What are they saying?” Marcus asked.

The kid shook his head, flinging a bead of sweat from his eyebrow to the floor. “They can’t tell for sure. They can only make out three words. Exist, allow, and cannot.”

Marcus nodded slowly. “Thanks, son. Get out there and help load, we’re running out of time in this heat.”

“What do you make of that?” Hamilton asked once they were both inside.

Marcus shook his head. “I’m impressed we were able to get that much. An alien language… Heck we didn’t know it was a language until a few weeks ago. But I don’t know how those words help us.”

Hamilton frowned. “I don’t like it. ‘Allow’ and ‘exist’ should not be in a sentence together. Puts our position in a rather different perspective.” An uncomfortable moment passed as the weight of what Hamilton said settled in both men’s hearts. Hamilton coughed lightly. “I’ll talk to the maintenance man.” He rushed away at a speed that was shocking for a man his age.

Marcus walked to the first desk he came to. A young woman was just hanging up the phone, her face pale despite the temperature of the room. “Are the police giving us an escort or not?” Marcus asked.

She swallowed. “Sir, it’s never been this hot. The wheels of all the police cruisers…they’ve burst.”

“What?” Marcus didn’t bother waiting for an answer. He bounded to the nearest window and opened the blind. The light blinded him at first, the intense heat hitting him like an oven. When his eyes adjusted, he saw the air rippling over the tarmac, the grass yellowing and smoldering.

Marcus closed the blinds quickly. He turned around, his heart and stomach feeling like they had switched places. “Everyone,” He started, but it was too quiet. Everyone was continuing their work, unaware of how the situation had changed. Cannot allow exist, cannot allow exist….

“EVERYONE!” Marcus yelled, and this time he was heard. “Radio all drivers, loaders, and pilots. No one leaves this hanger!”

Marcus ran in the direction Hamilton had gone, dodging people and furniture until he reached the air conditioning control room. Hamilton just finished making his case when Marcus approach the man he was talking to, a small, rough looking man with a moustache and beady eyes. “Can you get us to a sewer?” Marcus asked.

The man nodded. “Great,” Marcus said, “lead as many people down there as you can and get to the city as soon as possible. The aliens have turned the heat on us.”

“Are you sure about this plan?” Hamilton asked, “Won’t the people panic?”

“Have faith, Hamilton,” Marcus said, his eyes wide as he grabbed the Hamilton’s shoulder, “Have faith.”