Review of The Windup Girl 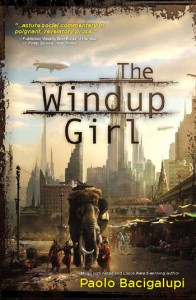 It’s a dilemma we all face to one extent or another: we like technology, but we hate what it does to the environment. We like driving, but not oil spills. We like electricity but we don’t like to think about what ecosystems are being damaged to produce it. You’ve got solar cells? Great, what are they made of? Is that recyclable? We are in the process of resolving this conflict, but we’re not there yet. Let’s say the fossil fuels we rely on finally go out. Let’s say all the things environmentalists have been warning us about actually happen. What’s next? How would people cope?

The Windup Girl, by Paolo Bacigalupi, takes place in a different world. A world that is born after the world as we know it ends. The primary sources of energy are metal springs wound by hand or by the use of elephantine beasts of labor, and the methane produced when burning the refuse from men and beasts alike. The main police force is the Environment  Ministry,  who patrol the city in their white uniforms, ruthlessly burning or destroying anything that might pollute resources too much, or release plague into the populace. The only edible plants that survive are genetically modified to resist such plagues and even then have to be closely monitored. The “white shirts” are at constant odds with businesses, who often hire mercenaries to protect their cargo from destructions when bribes to corrupt white shirt officers don’t work. And then there are the people who are genetically modifying the crops. Called gene rippers, they are loathed by all because they are the source of the plagues that threaten the populace, but tolerated because without them, there would be nothing to eat.

From this short description, you can already get an idea of the vast amount of world building that Bacigalupi did for this book, and his characters are as complex as the world they inhabit.

Anderson Lake is a gene-ripper who has a cover job as the overseer of a massive kink spring factory. The factory is huge, with giant elephant beast turning giant cranks in giant baths of algae. Helping him out with the logistics of this operation, and with bribing the necessary officials is Hock Seng (pronounced hock sahn), an Chinese refugee from the genocidal massacres that had taken place in Malaysia several years before. Hock Seng’s entire family was killed during the tumult there , and he had barely made it out alive. So now, even as he pretends to do Anderson’s bidding, he is secretly making plans to steal enough money to establish himself as a merchant in a country where he won’t be persecuted.

The book starts as Lake finds a bizarre fruit in a market that seems to be immune to plague. Realizing that this means there must be another Gene-ripper around, and that this gene-ripper must have access to other sources of genetic information, Lake quickly makes meetings with important business leaders in order to leverage himself into getting access to the gene pool. One of these meetings takes place in a brothel where a beautiful looking Japanese girl, with skin eerily white and smooth, serves Lake. She moves in stops and starts, identifying her as a genetically modified or “new” person. She is Emiko, the wind-up girl.  She is lower than a slave in the brothel, only allowed to exist because of the bribes paid to white shirts. She is mocked, ridiculed and despised by almost everyone she comes into contact with. But Lake is intrigued by her, and he tells Emiko of a village of wind-ups to the North where Emiko might be accepted. This gives Emiko hope for the first time in years.

Finally there are Jaidee and Kanya. Jaidee is the captain of a squadron of white shirts. He started out as a Muay Thai boxing champion and carries his fighting spirit into his job. When there is a ship full of suspicious cargo, he doesn’t bother trying to sort through it, he burns it all. Even while most of the Environment Ministry are despised by the people for their corruption and meddling, Jaidee is well-liked because of his pure motives. But his exuberance has cost a lot of powerful businessmen, and they are going to try to make him pay for it.

Kanya is Jaidee’s first officer, and where Jaidee is boisterous, Kanya is quiet. She rarely ever smiles. She seems at first to be a relatively minor character, but she has many secrets, and after a series of catastrophes, she becomes one of the most important characters in the book.

The Windup Girl is science fiction written as epic fantasy. If you’re ready for it, the plot is intricate and engrossing, but if you aren’t, it can also be complicated and confusing.  There are also several sections depicting gory scenes, and there are two rape scenes that I find disturbing. These scenes aren’t gratuitous. They are important to show the arcs of the characters, but you should know this isn’t a book of chaste kisses on gleaming spacecraft or anything. This is a gritty depiction of an all too possible future, a future that you could argue is already taking place in some developing countries.

So why should you read it if it’s so depressing? First off, I wouldn’t call it depressing. I would say illuminating and even uplifting to an extent. The book illustrates an important point about the conflict between technology and nature: there is no real conflict. Technology comes from us, and we are part of nature. Nature changes all the time, and like all creatures, we must adapt or perish. We can now control larger and larger areas of nature. As part of nature, we have to adjust to this. We can’t eliminate technology, but we can’t be reckless with it either. We’re grabbing the steering wheel of the Earth-mobile. If we don’t pay attention, this could go very badly.

This isn’t the only theme of the book,  and I’m not sure if the author would even agree completely with my interpretation. You don’t have to agree with the theme to like the book, though. The characters carry the story. They are all flawed people trying to do the right thing even while they end up fighting against one another. Anderson Lake is my least favorite of the point of view characters, but even though he can be arrogant and inconsiderate, even cruel, he has a discernible arc, and his motives are understandable.  All of the characters, Anderson included, had numerous moments where I was rooting for them. 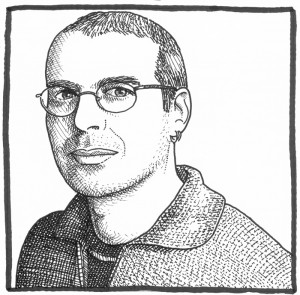 On the negative side, there were some ends that were a bit too loose at the end of the book. Particularly for Hock Seng. He was the biggest underdog in the story and his fate was a bit too unclear for my taste. Although some things made sense after thinking about them for a while, the ending initially felt a little too abrupt too. I wasn’t sure about the arc of all the characters. Once I figured out how everything tied togethera couple days after finishing the book, I was struck at how moving it all was. As I figured out, there is an emotional theme along with the semi-political one. To paraphrase Jaidee…Cities don’t matter. Plans don’t matter. In the end, what matters is people.

There were some moments as I was reading to the book that I didn’t like it much at all, mostly because some of the scenes with Emiko were a bit hard to get through, and because it took a while to get a grasp on the plot, but by the end of the book, it was a 7/10, and after I reflected on it, it reached 8/10. (This is a pretty high score. For comparison, the Lord of the Rings movie series gets an 8/10 from me).  I bought the book after attending a panel at The Southern Festival of books where Bacigalupi was a guest. He does an incredible amount of research for his books and seems to look deeper into things than most people. After reading this book, I want to meet him again so I can be properly impressed.